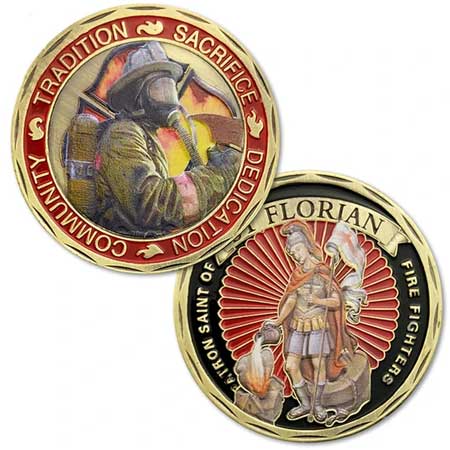 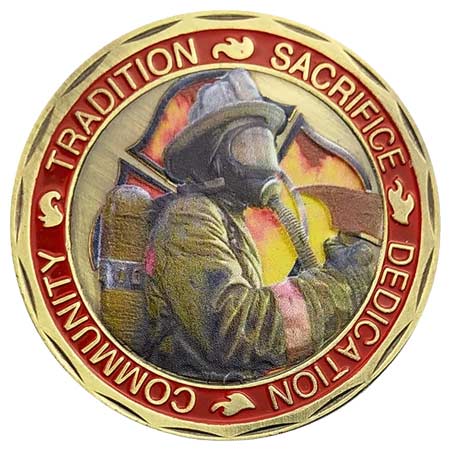 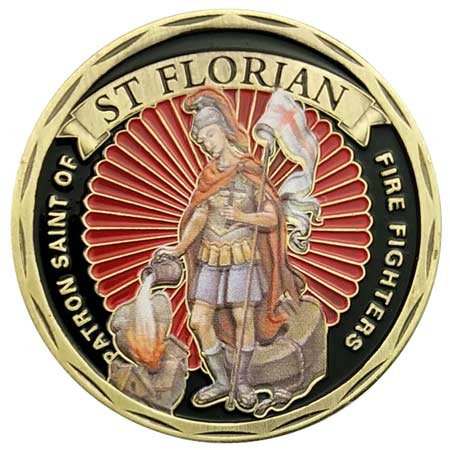 These Firefighter St. Florian Deluxe Coins are exquisite firefighter challenge coins. High quality, two sided, 1 1/2 inches diameter. All Firefighters are commemorated with these superbly crafted firefighter saint Florian coins. The perfect firefighter coins to give as gifts for fireman, fireman graduation gifts and firefighter appreciation gifts.
The front features a beautiful image of fireman with an SCBA (Self Contained Breathing Apparatus) and axe. The back features a rendition of another firefighting symbol: the classic Saint Florian, patron saint of fire fighters.

St Florian was born around 250 A.D.. He was commander of the imperial army of Roman and a secret Christian, who, in addition to his military duties, was responsible for organizing firefighting brigades. According to legend, Florian once stopped a town from burning by praying and throwing a single bucket of water on the blaze.

When Florian was ordered to execute a group of Christians, he refused, professing his own faith in Christ. He cheerfully accepted the beatings of the other soldiers, who tortured him with clubs, spikes and fire. Around 304 A.D., he was ultimately executed by being drowned in the Enns River with a stone tied around his neck. He is remembered today as the patron of firefighters.

Be the first one to write a review